This vegan and gluten free banana bread with shredded coconut recipe is simple and easy to make. And it is delicious!

About the flours used in this recipe

You will find here 3 different versions of my banana bread : one is simply vegan and gluten free the second one is paleo compliant and the third one is AIP compliant. Each version uses a different type of flour as follows if you are on :

As some of you already know, I'm not exactly Paleo, nor AIP, but my diet is something in between according to my own intolerances. So I'm lucky enough to be able to eat any of those 3 versions.

Those 3 options taste very differently thanks to the flours used in them. My personal favorite is the one using chestnut flour. But rice and buckwheat flours are way cheaper than chestnut and tigernut flour. And I'm trying as much as I can to stay on a budget which is a real challenge on this diet.

Chestnuts are nuts. So they are naturally gluten free and paleo compliant. Unfortunately, they are not AIP compliant.

On the picture uploaded here, is the chestnut flour version. The reason why it looks very brown is not because my banana bread was overcooked but it is due to the chestnut flour. This flour gives a brown color to cakes.

I've just discovered that while chestnut flour is very common in France, it is not well known in certain countries. So I'm just going to tell you some interesting facts about this gluten free flour, just in case you've never tried it before.

Chestnut flour has a sweet taste, perfect to make desserts but also to make bread. It is probably one of the best gluten free flours as it is full of nutrients, fibers, protein and essential amino acids.

That's the reason why, it was used a lot in France during the Second World War while stores were out of stock of pretty much everything. If you can find some, you should really give it a try!

Can I freeze this banana bread?

Yes, it freezes very well. Once this banana bread is cooked, allow it to cool completely at room temperature on a plate or wire rack. Once cool, you can freeze it. My favorite way of freezing it is by slicing it and transfering the banana bread slices to a freezer bag before storing it in the freezer. This way, I can easily take one slice out of the freezer, pop it in the toaster and here I have a delicious treat ready in a couple of minutes! If you don't have a toaster just allow the banana bread to come to room temperature on the counter. You can also freeze this banana bread whole, without slicing it.

If you are looking for other recipes using overripe bananas you can check the following recipes : 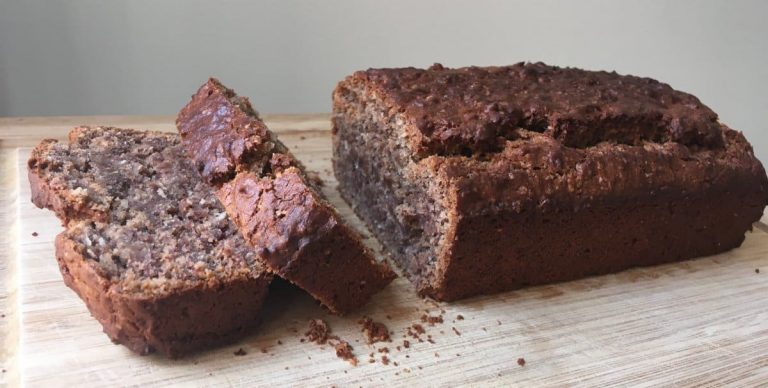 Although I spend quite a lot of time converting all my recipes to cups (yes, manually, in my kitchen!) I highly recommend using a scale and measuring for weight rather than using cups. The reason for this is, apart from the whole debate on accuracy, the density of certain gluten free flours and starches differ a lot from one brand to another. Also keep in mind that all cups are not the same size all around the world which makes another good reason to use a scale so you won’t get this issue. If you are not cassava intolerant and don’t have any arrowroot you can substitute it with tapioca starch/flour. If you are not on AIP nor Paleo diets you can use potato starch or corn starch instead of arrowroot. Please keep in mind that the nutritional information is calculated using a nutrition facts calculator. It is a rough estimate and can vary greatly based on products used.

This site uses Akismet to reduce spam. Learn how your comment data is processed.

Hello! I’m Bea, a French woman who has been diagnosed with ankylosing spondylitis and decided to heal herself naturally after many years of strong painkillers. Here, I'm telling you about my journey and sharing my recipes with you, hoping that it will help you somehow. Read more