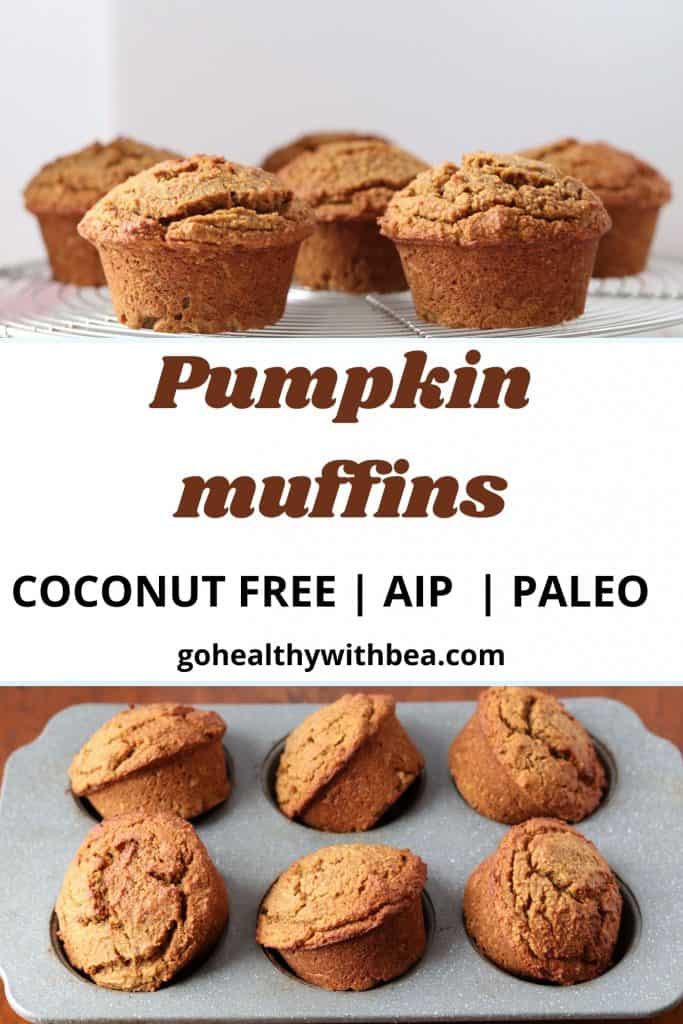 Delicious paleo pumpkin muffins that everybody will love! These Paleo Pumpkin Muffins are super easy to make, gluten-free, grain-free, vegan and AIP compliant making them perfect for most people.

This recipe is also coconut free and cassava free to be the most allergy friendly as possible.

So, some of my readers were asking me for a muffin recipe using pumpkin purée because they didn't realise this one was in fact what they were looking for. Anyway, however you call these muffins I promise you it won't change how they taste! lol

This recipe has been especially created for AIPers. But even if you are not following the autoimmune paleo diet, I promise you that you will love it! And even though it is still treat (and of course you shouldn't eat too many treats) I think it is a pretty healthy treat. Hope you will enjoy!

Notes about the ingredients

You can either use canned pumpkin purée or homemade pumpkin purée (I just take cooked pumpkin or butternut squash and put it in the blender with the other liquid ingredients from the recipe).

If you are on AIP and still in the elimination phase, you have to use tigernut flour (because almond flour is not AIP compliant).

Those who are not on AIP nor allergic to nuts can use almond flour instead of tigernut flour.

Are there any AIP compliant substitutions?

Unfortunately there are no possible substitution for the tigernut flour if you are on AIP and still in the elimination phase. Why? Because all the other AIP compliant flours have very different texture and they all need their own amount of liquid. So it is not possible to replace the tigernut flour with another flour without altering the entire recipe.

It is a starch. If you are not cassava intolerant, you can substitute it with tapioca starch (also called tapioca flour).

Other possible substitutions, only if you are not on AIP nor Paleo diets: you can use potato starch or corn starch instead of arrowroot.

If you want to reduce the maple syrup quantity in this recipe, I suggest replacing it by same quantity of oil of your choice (for example: ⅓ cup (80 ml) maple syrup + 3 tablespoon oil instead of ½ cup maple syrup)

This pumpkin muffin recipe uses a combination of cinnamon, cloves and ginger.

Please note that this recipe has been created for people on the autoimmune paleo diet which doesn't allow all spices. Although I am not an AIPer myself I love this recipe the way it is.

But if you are not on an AIP diet feel free to use a pumpkin spice blend of your choice.

Also, feel free to adjust the spices quantities to your own taste and omit one of them if you are intolerant.

For the complete list of ingredients for this paleo pumpkin muffin recipe, please see the recipe below.

Good news if you have a nut allergy and need a nut-free version, you can make these muffins with tigernut flour. Because tigernut is not a nut!

How to make these pumpkin muffins

Can I make a loaf instead of muffins?

Yes! If you don't have a muffin pan or simply don't feel like having muffins, you can make this as a loaf instead of muffins.

Use a rectangular 4x8 inches baking tin to make a pumpkin bread. Then follow the instructions in the recipe card below for the bread.

Can I freeze these pumpkin muffins?

Yes! They freeze extremely well. Which is so convenient!! So nice to have a delicious snack or dessert that is ready to be eaten in the freezer (well, it just needs to be thawed).

About thawing one of these delicious muffins, you can either take it out of the freezer a few hours ahead or pop it in the microwave oven (if you still have one, like me, and yes I know that they are very controversial health wise but nobody's perfect lol) for 1 minute or pop it in the oven for a few minutes. 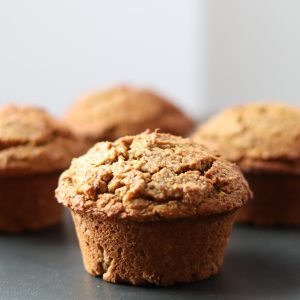 Please keep in mind that the nutritional information is calculated using a nutrition facts calculator. It is a rough estimate and can vary greatly based on products used. Although I spend quite a lot of time converting all my recipes to cups (yes, manually, in my kitchen!) I highly recommend using a scale and measuring for weight rather than using cups. The reason for this is, apart from the whole debate on accuracy, the density of certain gluten free flours and starches differ a lot from one brand to another. Also keep in mind that all cups are not the same size all around the world which makes another good reason to use a scale so you won’t get this issue. If you want to reduce the maple syrup quantity, I suggest replacing it by same quantity of oil of your choice (for example: ⅓ cup (80 ml) maple syrup + 3 tablespoon oil instead of ½ cup maple syrup).  If you are not cassava intolerant and don’t have any arrowroot you can substitute it with tapioca starch/ flour. If you are not on AIP nor Paleo diets you can use potato starch or corn starch instead of arrowroot.